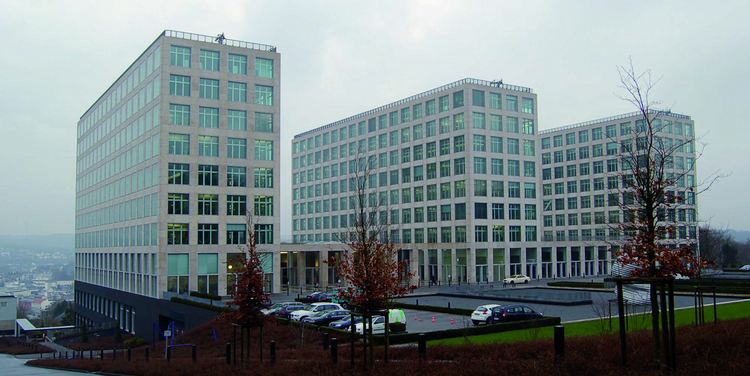 Barmenia in Wuppertal just received new inserting machines. The conversion was a success.

A broad product range, over 1.76 million contracts, and more than 3500 employees - Barmenia is a well known name among insurance carriers. At just over four million mailings per year, it may not be an industry giant. But the standards for corresponding with the policy holders are just as high as they are for all large and small insurance carriers. The new inserting machines help to meet these standards in an economical fashion.

The inserting machines were fairly old on the one hand. On the other hand, the outgoing mail system as a whole needed to be designed more economically and supplemented with additional services: The Barmenia insurance carriers are in the process of modernising their output management. "We want to fully archive all of the correspondence, also in order to provide our customers with a portal where they can review their own correspondence", the IT-Production department manager Michael Tasche tells us. Thus there were and are major changes pending which affect many business processes and interfaces to the customers. The two new inserting lines are one result which is already apparent.

No room for unpleasant surprises

A project team with employees from different departments was formed for this procurement. The team's first task consisted of defining the performance attributes and preparing a requirements specification. The most important premise was the use of multi-format machines which can be retooled with reasonable effort. Thus one machine can be on standby for C4, the other for DL size. During production peaks which occur at year end or during ad-hoc promotions, both machines can process DL size in order to double the output. Tasche: "Keeping one large machine available just for the C4 mailings - for which the scope is considerably smaller - wasn't very economical up to now." The wish list also included various additional functions. A market check and information gained at Drupa 2012 completed the first round of preparations. It turned out that most of the manufacturers serviced a different performance segment. There are many faster machines on the market, but they are also much more expensive. Mueller Apparatebau offered a package for the Barmenia requirements which was also suitable from an economic perspective. An on-site visit to the Kranzberg plant illustrated the vertical integration which is typical for Mueller Apparatebau. In addition to defining the design and configuration, an initial plan for the pending activities up to an including replacement of the systems was developed. Once management agreed to the purchase of the Mueller systems, Kranzberg began with production and assembly right away. The project team compiled comprehensive test material to put the system through its paces. Tasche: "We essentially transported our entire output including the required inserts to Kranzberg." The last step in the preparations was on-site acceptance, during which all essential functions were also tested successfully. Live production was switched over in early October: Saturday after the end of production, the old machines were taken down, and the new ones were in operation by Tuesday. "Nobody in the office noticed any effects of the conversion." Switching to the new machines - including implementation of processes and training of employees - went smoothly because both the targeted support from Kranzberg and the experiences gained there contributed to the result. The new technology adjusts smoothly to its environment.

From earlier user reports, POSTMASTER readers know that no Mueller system is exactly the same as the next. Rather, the systems are built up out of modules according to user requirements. Barmenia now has two machines with identical configurations. They are relatively large systems at 38 modules, and therefore able to meet all requirements placed on them. They both feature supply channels for C4 and DL size with collection units, in addition to a system for stapling of C4 and a folding module for standard letters. This is followed by a section with four inserting stations. All centrally produced letters mailed by Barmenia pass from a standard data stream through four Xerox dual-colour digital printers, then into the inserting machines. Most are released by data processing beforehand and sorted by format. These letters - large and small – end up at the rear output belt. A small portion of the letters needs to be returned to the office for post-processing. These letters are left open and output to a separate belt. Nothing is stamped any more since the conversion – this is done for Barmenia by a service provider. At the same time, policy pro- cessing was switched from eyelets to stapling. This results in significant cost reductions. Tasche: "Our requirement was a top-notch appearance; otherwise we would have had to consider other alternatives. "Stapling is performed dynamically, with the wire coming from a roll. Between one and one hundred sheets are collected, stapling is performed for two or more sheets which are connected with the required amount of wire - the length adjusts as needed. Stapling can be performed with one, two, or three staples. Tasche: "It works perfectly for all quantities!“ The machine configuration ensures that the upstream output management processes are practically unaffected. This also means that the processing sequences are different: A DL size mailing is normally read from the front to the back, while policies are read the other way around since they are stapled. Every mailing is processed from the last to the first page. The unfolded cover letter comes first at the output, followed by the stapled policy and lose inserts being placed into the envelope. The contents are read by the machine at the input and output to ensure absolute mailing integrity. Both machines are capable of full page reading. This allows for unrestricted layout design, and for placing the bar code or matrix code anywhere. Personalized inserts like those processed by the previous machines are no longer used. Tasche explains: “We now have a clear and standardized idea of what should come out in the mailing at the end, and we control this through the printing data stream.” In order to achieve complete processing within the printing and inserting process, file-supported processing will still be implemented during this quarter.

Always there for each other

After completing the actual joint project, Mueller Apparatebau continued to support Barmenia with production support and supports all mailing preparation tasks in Wuppertal. Thus - following commissioning - the first year-end Transactions on the new machines in the output department were also a complete success.