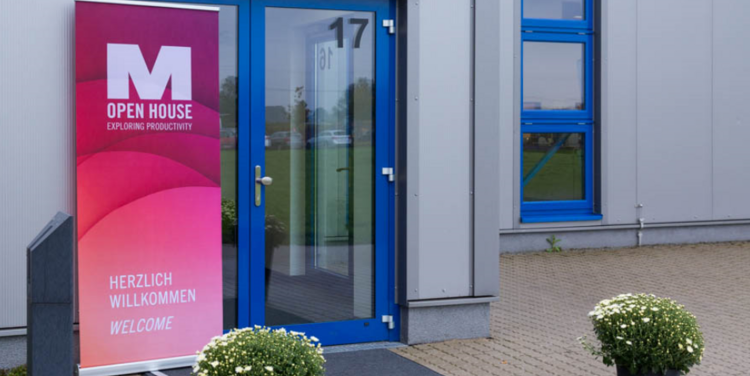 It has established itself as a firm tradition at Müller – the Open House. In the middle of September, the specialist for paper handling solutions opened its doors for this year's event, whose slogan was "Exploring Productivity". Around 350 guests responded to the invitation.

One of the exhibition's highlights was the première of the new Müller 8900 inserting machine. The Mmulti-format hHigh-performance Iinserting Ssystem processes 60,000 A4 documents per hour. A special feature of this system is its dual-channel function: depending on the configuration, it can be run as a continuous and, additionally, also as a cut-sheet channel system. The system can process DL, C5 and C4 flats envelopes. Furthermore, when changing over between jobs, settings on the modules are changed fully automatically.

As far as ongoing development is concerned, there was news regarding the Müller DocuTrim. This sheet processing system can work offline or online on printing systems such as the Ocè VarioPrint i300 from Canon. The new features housed in the dynamic multi-processor (DMP) include individually combinable dynamic tools for cutting, perforating, hole punching, creasing and die cutting for Wire-O binding. The DMP contains a blade cassette as standard. This enables split cuts and cut-outs irrespective of position.

The cutting line in the 150-metre class, Müller 6700, was shown online on the Ocè CS6000 at Open House. It is used at our customer Barmenia Versicherungen to trim the full-colour printed continuous web (transaction documents such as insurance policies and customer correspondence) to the final format of A4 and place the sheets on large stacks.

Letters with sensitive content, such bank statements for example, have to be checked with a high degree of precision. Müller has developed a new system for this task. The Müller 7700 output reading system, which works independently of the upstream inserting system. It can monitor mailpieces according to the double-checking principle to meet the highest quality standard.

Altogether Müller showed 10 exhibits, including classical systems that are situated in the company's own Experience Center (MEC) all year round and are used to give practical demonstrations: the Müller Card 5000, the Müller 8500, Müller 8300 and Müller 8100 inserting systems and the Müller 6100 cutting system.

Anyone wishing to learn more about development, production and workflows at Müller had the opportunity to do so during the factory tours or at our partners' fair stands. The following companies were represented Domino, MB Bäuerle, edataprocessing, Lake Image, Steinbeis, mayer network, AWA Couvert, Matti, Drewsen Spezialpapiere and Lewald & Partner.